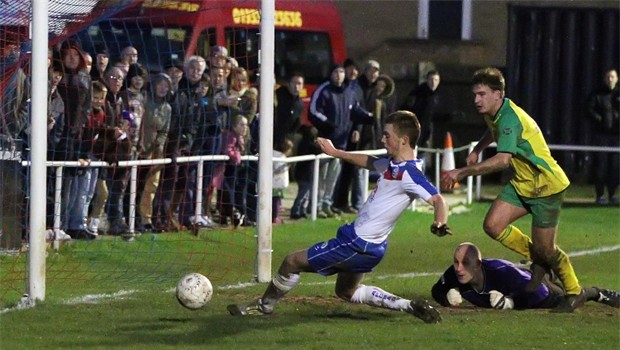 AFC Rushden & Diamonds recorded a 2-1 victory over Northampton Spencer in their first fixture of 2013. On a heavy Dog and Duck pitch Jake Newman opened the scoring on the stroke of half-time as he latched onto a through ball from Séan McBride and fired into the right corner of the net. The Diamonds striker headed home a second from a Ben Morgan cross after 57 minutes, but the visitors did manage to deny the Diamonds a clean-sheet with a late goal from Paul Pickering. The victory takes the Diamonds up to third place in the UCL Table.

Following sterling work from a band of volunteers the Dog and Duck pitch had been made playable after the recent flooding, although there were two heavily sanded areas in front of the dug-outs. Thanks to the co-operation of Northampton Spencer and the UCL the game had been rearranged at two days’ notice, so the match-day attendance of 584 was also a credit to the dedication of the Diamonds fans to their new club.

Diamonds manager Mark Starmer gave a debut to Brad Harris as he reshaped his side because of the unavailability of Joe Merrill and Elliot Dent, the injury to Jack Wisniewski and the suspension of Jake Gillingwater. The Diamonds lined up with Hope, Deakin and Brown in a back 3, behind a midfield 5 of Allen, Gearing, Harris, McBride and Morgan, with Alfie Taylor reclaiming the number 9 shirt alongside Jake Newman up-front.

The first quarter of the game was largely uneventful, with neither keeper troubled apart from when Séan McBride burst through to chase what looked like a lost cause and forced keeper Lutter and a defender to miscue the ball for a corner.

Midway through the half the Diamonds had the ball in the net but referee Capps had seen a foul on the goalkeeper.

The only real threat from the visitors came five minutes before the interval when a miscued shot from Bartley was picked up on the right flank by Ryan Dove and his low cross flashed across the area.

Alfie Taylor forced Lutter into a regulation save just before the break, but after 45 minutes the Diamonds took the lead. Matt Gearing found Séan McBride in space in midfield, and the reliable McBride hit a perfect ball forwards in the left channel to Jake Newman who controlled it with his first touch before making room to fire low into the right hand corner of the net. The goal meant the Diamonds striker has now scored in eight consecutive games.

With the Diamonds attacking the Peter De Banke terrace in the second half they took advantage of the better pitch condition at that end of the ground with some crisp passing and flowing moves that immediately put the visitors on the back foot. Ben Morgan was spending more time on the right flank, and he set up an early chance for Newman that was well hit but unlucky to be blocked by the advancing Lutter.

Matt Gearing was also causing the Millers’ defence problems, and his run onto a pass from Alfie Taylor saw him hit the post with Lutter beaten. Jake Newman was always willing to help his midfielders, and he fired a ball forwards to Alfie Taylor that the returning striker was unfortunate not to turn into a goalscoring chance as he lost his footing. A minute later Taylor showed excellent ball skills as he brought down a long ball forward from Chris Hope, and after being challenged by a defender he slipped the ball wide to Ben Morgan on the right. Morgan hit the sort of cross that few goalkeepers would be able to deal with, finding the head of Jake Newman at the far post to make it 2-0.

Lance Allen was having his best game for the club to date, and once into his stride he was giving the Millers’ defence plenty to think about, and he set up Newman with a chance for his hat-trick, but the shot was blocked. Ben Morgan set up Matt Gearing for another strike on goal that was saved, and a powerful shot from Chris Hope narrowly missed the angle of post and bar as the ball was rolled to him at a free-kick.

The visitors hadn’t produced much of a threat in the second period, but the Diamonds defence allowed Paul Pickering too much time in the area when he picked up the ball with his back to goal, and he was allowed to turn and shoot into the right-hand corner of the net. 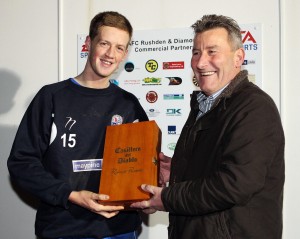 That meant the final few minutes of the game were rather more nerve-wracking than they should have been, but the Diamonds held out for their first win of 2013.

The Diamonds travel to face Oadby Town in the UCL on Saturday (KO 3pm).

Click here to get all the news straight to your inbox
We use cookies on our website to give you the most relevant experience by remembering your preferences and repeat visits. By clicking “Accept All”, you consent to the use of ALL the cookies. However, you may visit "Cookie Settings" to provide a controlled consent.
Cookie SettingsAccept All
Manage consent

This website uses cookies to improve your experience while you navigate through the website. Out of these, the cookies that are categorized as necessary are stored on your browser as they are essential for the working of basic functionalities of the website. We also use third-party cookies that help us analyze and understand how you use this website. These cookies will be stored in your browser only with your consent. You also have the option to opt-out of these cookies. But opting out of some of these cookies may affect your browsing experience.
Necessary Always Enabled
Necessary cookies are absolutely essential for the website to function properly. These cookies ensure basic functionalities and security features of the website, anonymously.
Functional
Functional cookies help to perform certain functionalities like sharing the content of the website on social media platforms, collect feedbacks, and other third-party features.
Performance
Performance cookies are used to understand and analyze the key performance indexes of the website which helps in delivering a better user experience for the visitors.
Analytics
Analytical cookies are used to understand how visitors interact with the website. These cookies help provide information on metrics the number of visitors, bounce rate, traffic source, etc.
Advertisement
Advertisement cookies are used to provide visitors with relevant ads and marketing campaigns. These cookies track visitors across websites and collect information to provide customized ads.
Others
Other uncategorized cookies are those that are being analyzed and have not been classified into a category as yet.
SAVE & ACCEPT