AFC Rushden & Diamonds produced another excellent away performance when they drew 1-1 with Shaw Lane AFC in Barnsley on Saturday afternoon.

The Diamonds got the point they deserved from the game via a deflected Richard Bunting shot six minutes from time, after the hosts had taken the lead five minutes earlier.

The game was fairly even throughout, although the Diamonds had the better of the first half with their hosts creating more chances in the second period. The first half saw a number of half-chances fall to both teams, with Richard Bunting having two long range efforts and an early chance fell to Jake Newman.

After a number of lack-lustre performances in recent drawn matches at the Dog & Duck, the effort and attitude in this game, against the favourites for the league title, were top drawer. The Diamonds defence, marshalled by the ever impressive Liam Dolman made sure the free scoring Ducks were restricted to speculative efforts on goal for much of the game. The new-look midfield also influenced the game throughout, with Ben Farrell impressive both when helping out in defence and when he made forward runs. The Diamonds forwards also should get their share of the plaudits as they pressurised the hosts defence at all times, making them resort to a long-ball game more than would have been expected.

The hosts goal came when the ball was quickly worked across the face of the Diamonds defence, finding a gap which Gary Burnett was able to take advantage of, slotting a low shot inside the right hand post after 79 minutes. The Diamonds were able to quickly threaten in reply, and it came five minutes later when Tom Lorraine, working in the right channel, challenged the home keeper to a high ball, and with the keeper unable to gather the ball it was worked clear to Richard Bunting on the edge of the area, and his shot took a deflection as it flew into the net.

Both sides had late chances to win the game, but a draw was probably the correct result.

Diamonds Manager Andy Peaks brought in Kyal McNulty at right back, and gave a first league start to Ben Farrell as part of a midfield trio as he partnered Richard Bunting and Lewis Leslie. Jake Newman took a wide left role, with Tom Lorraine on the right and Nabil Shariff down the middle. On the bench there was one surprise as Robbie Parsons took his place after he returned from a spell at Corby Town, with Jason Lee having moved in the opposite direction.

With the hosts doing so well in recent matches, and the Diamonds rather struggling in the games against Market Drayton and Lincoln United, it was the Diamonds that looked to force the game in the early stages. A free kick inside the first minute appeared to cause problems for the home defence, with an early sign of unsure handling from home keeper Stewart, Both Diamonds full backs were able to make forward runs, supporting Lorraine on the right or Newman on the left with a McNulty cross giving a chance to Jake Newman. Lewis Leslie was the most advanced of the midfield trio, but both Richard Bunting and Ben Farrell were able to make occasional bursts forwards to support the attacks.

The Diamonds had the greater number of half-chances during the first period, winning six corners during that period as well as a number of opportunities from free kicks and long throws from Sam Brown, but couldn’t really create the gilt-edged chance they required.

Ben Farrell picked up a yellow card for a solid tackle, but referee Salmons was doing a good job keeping the game flowing and ensuring he refereed the game himself without needing the advice coming constantly from the home players and bench.

The best chance of the half for the Ducks came seven minutes before the break when a cross from the left was headed just wide of the post by Gary Burnett. The Diamonds the forced two late corners that threatened to give them a half-time lead their play would have deserved, but the home defence held firm.

After the break it was the hosts who got back into their stride the quickest – indeed they looked more threatening early on than they had done all game. Rory Winters was having a solid game and he was able to make an important tackle to thwart one attack, before a long ball from the Ducks almost paid dividends but Andy Gascoigne shot just over.

It was important that the Diamonds were able to counter this increased threat, and they did so via a surging break from Nabil Shariff that was halted with by a foul challenge and from the resultant free kick Richard Bunting saw his effort go wide of the post. Shariff had a chance of his own that went just wide as the match returned to a fairly even game.

After 70 minutes a strong break from Tom Lorraine was halted by a challenge from Ducks captain Ryan Qualter on the edge of the area, and he picked up a yellow card for this. Before the free kick was taken the Diamonds made their first (and only) change of the game with Joe Curtis replacing Lewis Leslie – which meant that Curtis was able to make his league debut after finally overcoming his injury issues. The kick was taken by Liam Dolman and narrowly missed, ending up in the side-netting. Ben Farrell made another forward run shortly afterwards that threatened the home defence as he linked with Nabil Shariff.

Although the contest still hadn’t produced many clear-cut chances, the battling Diamonds were still good value, and it was thus rather a surprise when they conceded a goal that seemed rather routine. An attack down the right appeared to have been dealt with as the ball was forced into touch, allowing the defence to regain its shape, but the ball was quickly returned into play on the right and worked across the pitch in front of the Diamonds backline before an incisive pass found Gary Burnett as he broke into the area unchallenged, and he was able to slot the ball low into the right-hand side of goal.

Perhaps a team that hadn’t had the impressive league run of the Diamonds, with their catalogue of recovery performances against the top teams on the road, might not have been able to recover from such a blow, but there was no sign of panic, and within five minutes they were level. A high ball into the area saw Tom Lorraine jump for the ball with home keeper Stewart, and after falling loose it was only half-cleared as far as Richard Bunting. He hit his shot well, but it had the benefit of a deflection as it powered into the back of the net. Bunting seems to relish scoring against the top teams on the road, and the Diamonds were able to celebrate their goal as the hosts had done five minutes earlier.

Both sides then went looking for a winning goal, and although it was the Diamonds who were on the offensive as the match moved into the third minute of added time, referee Salmons called time on a contest that was a credit to both sides without ever threatening a hatful of goals

A special mention must be made of the warm welcome the Diamonds received in this part of Yorkshire, complete with pre- and post-game mince pies. The fans were also treated to the unusual sight of a Rugby ball flying into the action as the adjacent pitch had Barnsley Rugby Club in action. The fans were also able to carry out a period of applause in memory of Dale Roberts after 24 minutes.

The Diamonds now have a quick turn-around game at Lincoln United on Tuesday evening. 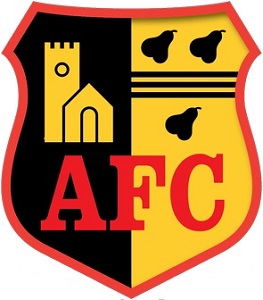